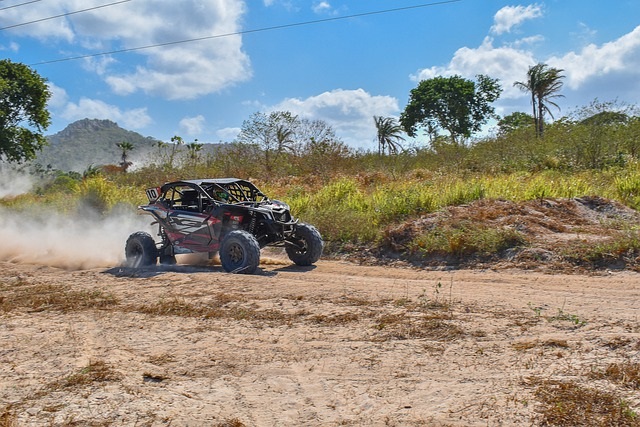 The UTV’s Rise from Farm Vehicle to Racing Beast

If you have seen four-wheel vehicles roaring and racing in the Imperial Sand Dunes in California or fighting for every inch of terrain across the canyons and valleys of Utah’s Moab trail, you have probably seen sports UTVs.

Some of you may have also seen Brad Pitt in wholesome beach images teaching his son all about this new rage in off-road adventuring. But are these vehicles new? Not by a long shot! To paraphrase UTV lovers, nobody invented this machine. It evolved. So much so that today, UTVs enjoy a wider market share than our good old dirt bikes, trucks, and 4x4s.

Modern recreational UTV Polaris Ranger models, Can-Am, Arctic Cat, Honda, and its brethren are more than utility vehicles. Their owners modify them the day these beauties go out their factory doors. Equipping them with an assorted range of Trinity Racing products, new seats, and safer harnesses, rooftops, mirrors, bumpers, LED lights, better exhaust systems, or engine upgrades, UTV lovers are the talk of the town.

So how did this piece of farming equipment become a culture in its rights, the Holy Grail of all vehicular sensation seekers?

A Walk Back on Memory Lane

As we said, there is no clear Eureka moment in the UTV’s history, as no one invented it out of their imagination. Instead, the UTV evolved on the shoulders of giants: the 1941 military roofless Jeeps. After the war, Jeeps became widely available and instantly popular. Even if today side-by-side vehicles and Jeeps cannot be more different vehicle classes, the UTV still owes a nod to its precursor.

But the Jeep is not the only type of vehicle engrained in the DNA of a UTV. The roaring fifties and sixties found drivers stripping down their cars to turn them into dune buggies for more intense off-road feels. The rise of the Meyers Manx in the sixties – the first fiberglass buggy – paved the way for modern side-by-sides and UTV racing.

Where Does the ATV Come into the Picture?

Before the UTV as we know it and even before the ATV as we know it, history dealt with amphibious all-terrain vehicles (AATVs). They became famous for their unique build (six or eight wheels) ability to traverse off-road terrains and water. If you didn’t realize by now, the sixties were crazy, crazy years. Nevertheless, the AATVs are still around today, used by organizations with very specific needs.

The most obvious precursor of the UTV is the ATV, with a similarly interesting history and a strong reputation among all off-road buffs and sensation-seeking racers. The most noticeable difference between the two vehicles is that ATVs are for solo riders, while UTVs can carry up to six people. However, the dissimilarities between the two do not stop here.

Just like the UTV in its first days, the ATV was a utility vehicle. After that, however, more and more people embraced its versatility. Soon, ATVs were everywhere. Riders took the world by storm with their roaring machines, crossing deserts, forests, rocky mountains, mud, dirt, and dangerous terrains for fun and adventure.

The Mule that Changed Everything

The thirst for a bigger, better, more stable, more spacious, and stronger all-terrain vehicle led big names in the industry to think about ATVs with four wheels and more seats.

In 1988, we got the Kawasaki Mule UTV, and from that point on, things were never the same. More useful than a truck but more adaptable to peoples’ needs than a regular ATV, the Mule was a success. It didn’t take long to become a staple of hard work: farming, agriculture, cargo hauling, park management, wildlife management, hunting, etc.

Even the Polaris Ranger you’ve heard so much about started as a utility vehicle. It was stepping in the Mule’s footsteps together with other UTV models. No matter how many manufacturers created Mule-inspired machines, the vehicles’ main purpose and use were still work-related. Those who wanted to have some outdoor fun or thrills still had to rely on their ATVs, Jeeps, dirt bikes, etc.

In 2004, Yamaha took a small step (according to the industry of that time), but a huge step for off-road buffs everywhere.

The Yamaha Rhino was both a utility vehicle and a recreational one. It did not take long for enthusiasts to understand that this trailblazer changed the off-roading landscape forever. Finally, in 2004, the consumer purchases of UTVs surpassed commercial ones, and then the world never looked back.

The Rhino is, according to experts, the start of modern UTV history.

Then, things escalated fast: in 2006, Arctic Cat produced the Prowler, and a year later, Polaris came with the RZR, the first full-sport UTV on the market. This machine looked different, behaved differently, could go virtually everywhere you could imagine and was affordable enough to become a staple for outdoor fun, challenging terrains, and, of course, competitions!

Did You Ever Ride a UTV?

UTV manufacturers are challenging the current standards and paradigms every year with each new model they issue. You may love your Can-Am Commander or the Kawasaki Teryx, but what do you think about the single-seated Polaris Sportsman Ace?

If you have never rode a UTV before, don’t miss this opportunity! After all, Brad Pitt, Gisele Bundchen, Justin Bieber, Tom Brady, Simon Cowell, Valentino Rossi, and even Dr. Dre recommend this type of fun, according to all journalists who spotted them riding such beautiful beasts! The Benefits of Telehealth for Atlanta Pet Owners